One of the benefits of Active Roles is that administrators do not need permissions on Active Directory to perform user management and other tasks. This forces administrators to use Active Roles and assures secure administration with the enforcement of “Rules and Roles” provided by Active Roles. However, this lack of AD permissions might be a problem if the Administration Service becomes unavailable. The impact of this potential problem depends on the specifics of the situation, but the problem can be addressed with the following guidelines.

Two guidelines should be followed for major sites:

Replication traffic can be judged by considering what is replicated and what is not. Active Roles configuration information is replicated only if it is changed. This means that if administrators are not creating Managed Units, Access Templates, Policies and delegating permissions that often, there is not much replication traffic.

Locations and number of services

After considering the major factors that might influence the locations and number of Administration Services, organizations should have a network diagram that illustrates a high-level design for the Active Roles deployment.

This diagram shows a centralized network and workflow (the ARS abbreviation refers to the Active Roles Administration Service). 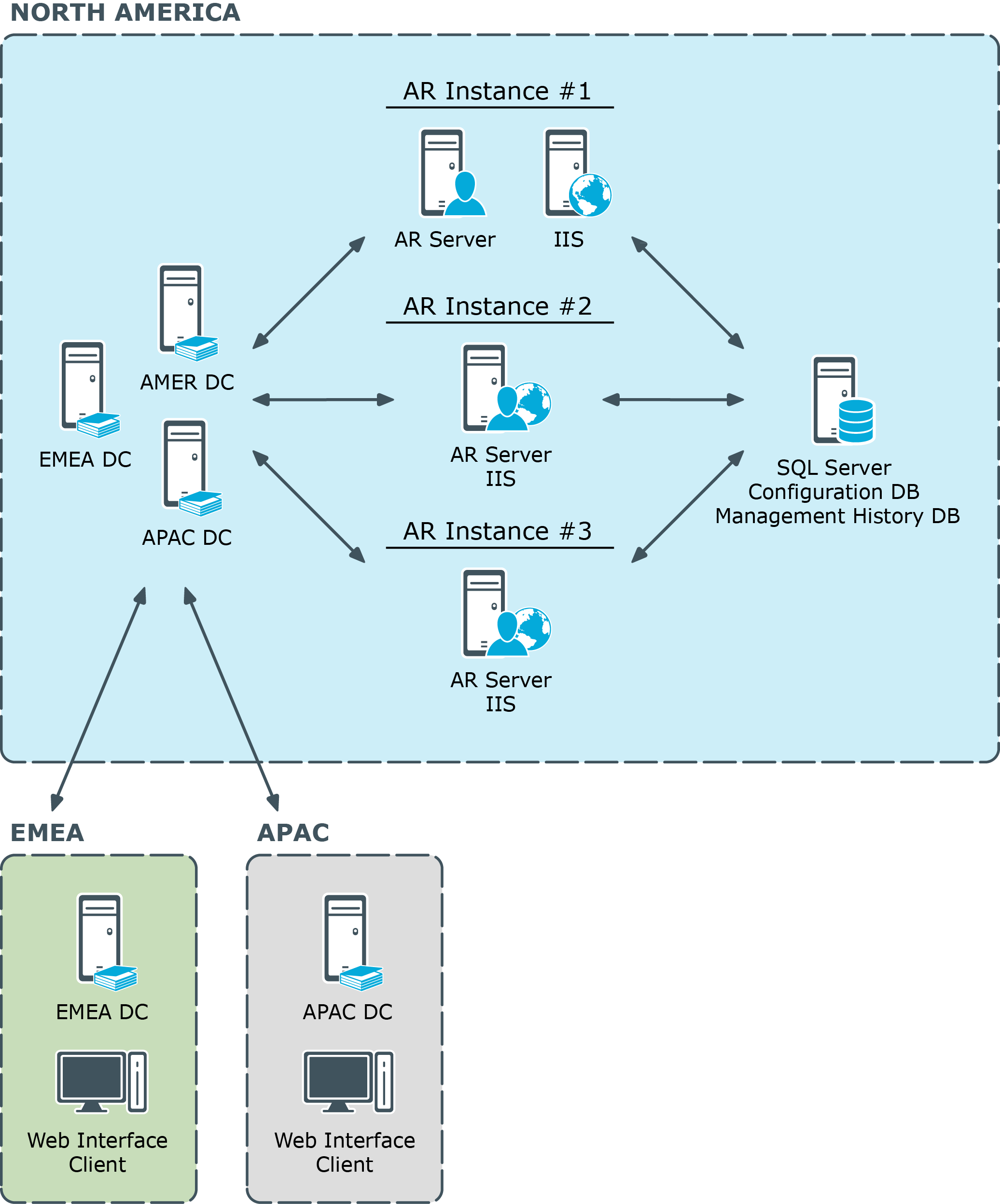 In this centralized structure, all AD data management is done from the corporate headquarters by a group of network administrators and the Help Desk staff. The headquarters is a large campus location with several well-connected sites. Most employees work at the headquarters. Large remote sites will have networking personnel who are responsible for the tasks such as hardware and software setup and maintenance. Small remote sites are staffed by non-technical employees. Network maintenance for these sites is done by IT staff that travels to them or by contractors.

Typically, customers do not install all Administration Services at one location, but in this case, one or both of the following business workflow and technical factors over rule that guideline:

Distributed with no remote management

This diagram shows a distributed network and workflow (the ARS abbreviation refers to the Active Roles Administration Service). 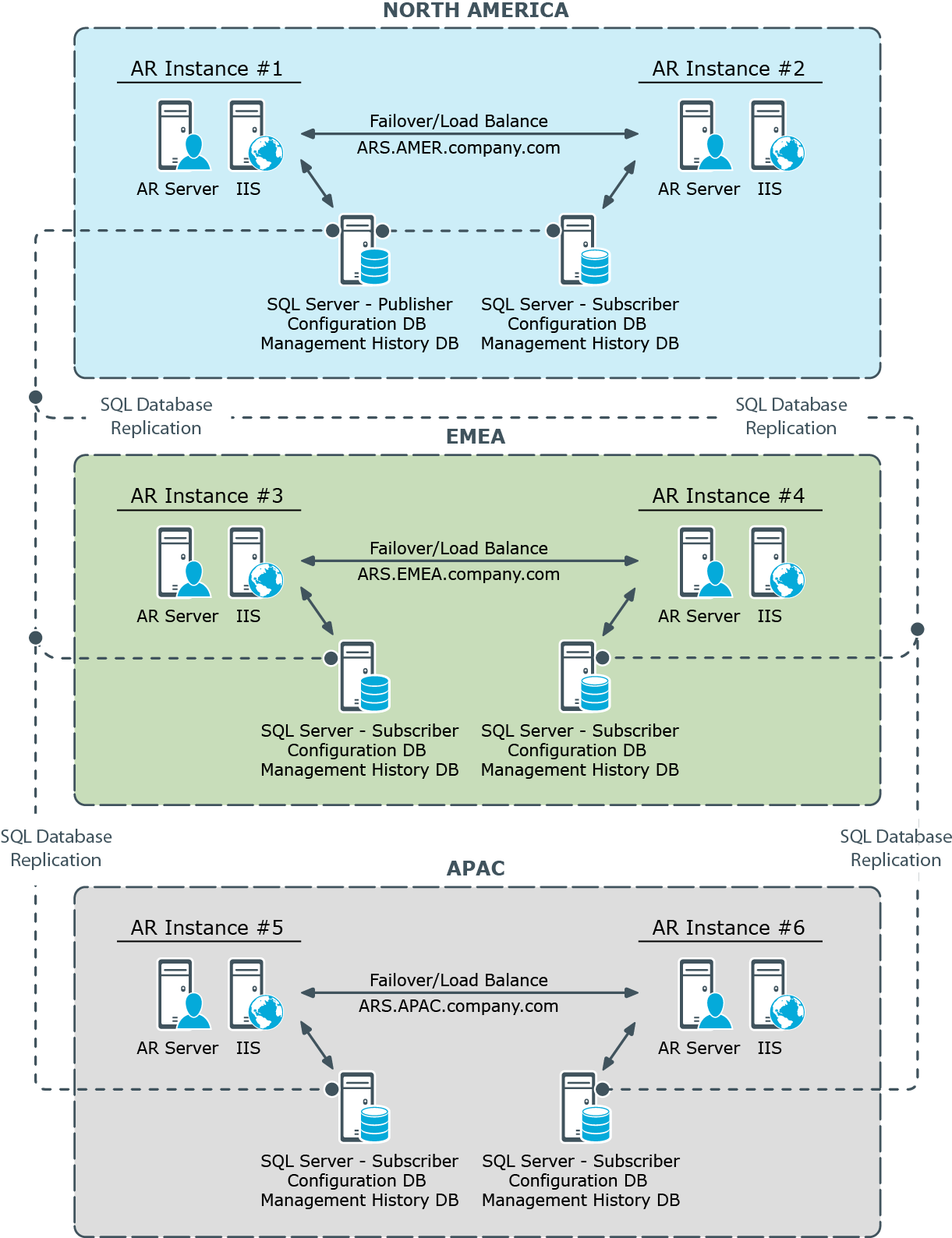 In this scenario, AD data management is performed at major locations by a group of network administrators and the Help Desk staff. These locations can be campuses or single locations connected by LAN/WAN connections.

Large remote sites have networking personnel who are responsible for tasks such as hardware and software setup and maintenance. Small remote sites are staffed by non-technical employees. Network maintenance for these sites is done by IT staff that travels to them or by contractors.

This diagram illustrates a highly distributed network and workflow (the ARS abbreviation refers to the Active Roles Administration Service). 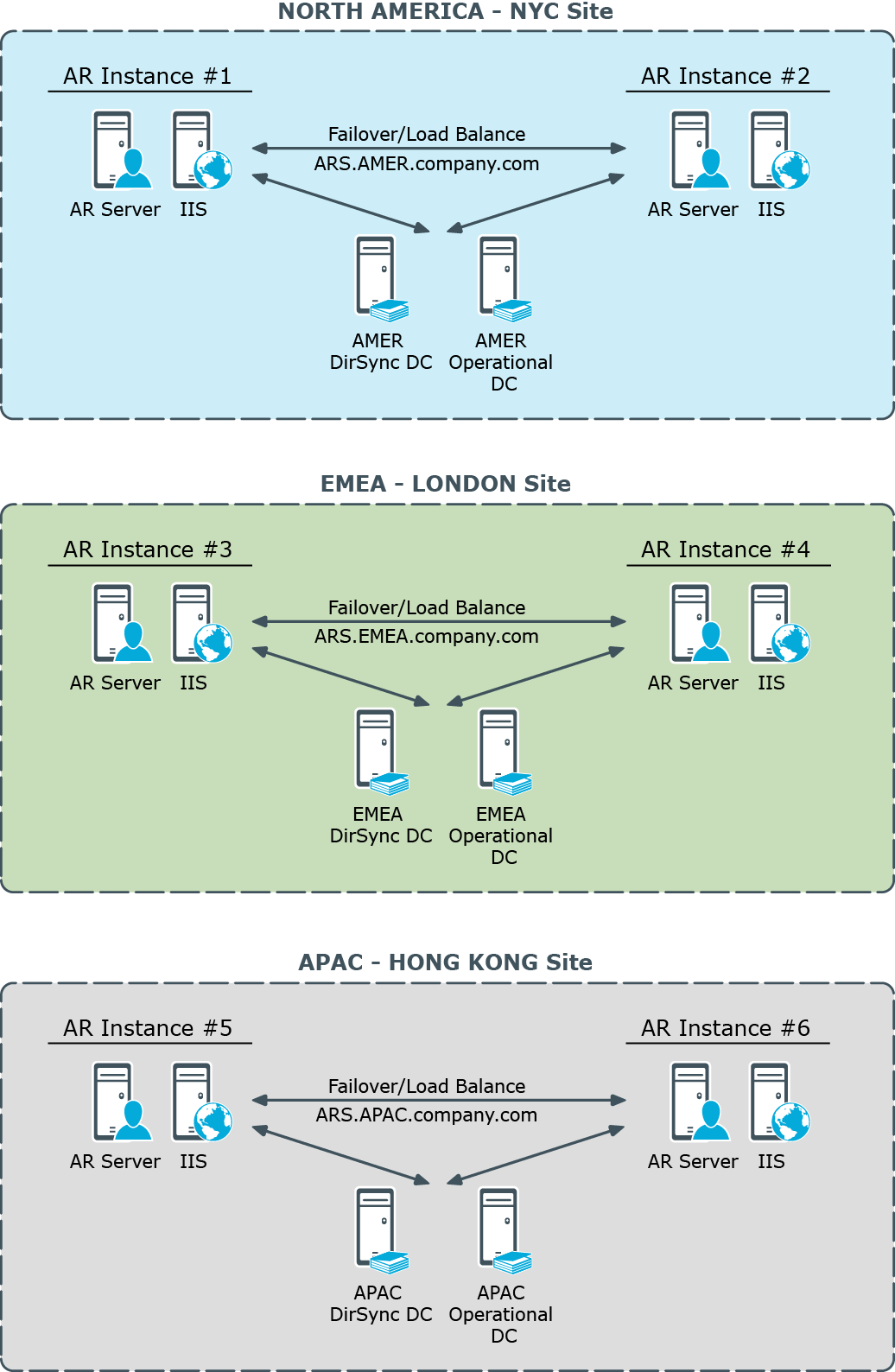 In this scenario, AD data management is performed at all locations. These locations can be campuses or single locations connected by LAN/WAN connections. The work is done by a group of network administrators and the Help Desk staff. Work group managers perform very low-level work such as access to specific file directories and distribution lists.

Administrators at the smallest locations access the Administration Services at the large locations via the Web Interface. The reason for this is the number of users and administrators and their workload.

This section covers two typical installation configurations for Active Roles. In both installations the architecture is designed to maximize the effectiveness of the Active Roles software based on how the network is configured and how administrative duties are assigned.

Several software components must be considered when deploying Active Roles:

The decision where to place servers running the Active Roles software components should leverage the strengths of the existing network and the associated IT Service structure.

This diagram illustrates a centralized deployment of Active Roles with the following characteristics:

Normally, the Active Roles Administration Service (AR Service) itself chooses the Active Directory domain controller (DC) to communicate with, which is the nearest DC by default. With a centralized deployment model, this means that the AR Service will select DC found in the same location where the corresponding AR instance resides, so even the regionally local changes calls (those submitted from the EMEA or APAC location) are performed against DC located in North America (rather than a locally-placed DC) thereby causing an additional slow-down due to Active Directory replication latency.

The preferred behavior would be as follows:

The appropriate choice of DC would ensure that the changes appear on the target site without an Active Directory replication related slow-down. Active Roles users can choose an appropriate DC by using the Change Operational DC command on the menu for the domain object, in the Active Roles console or Web Interface. If operational DC is explicitly specified by the user, the AR Service submits the change requests to that DC instead of the nearest DC.

The second installation configuration is the Distributed model where servers are deployed by analysis of how the network is configured and how administrative duties are assigned and performed.

In a distributed environment there are three primary criteria for the determination of the placement of Active Roles:

If the administrators reside in one location and domain controllers reside in another, the determining factor would be WAN reliability.

However, from either the Console or the Web Interfaces it is possible to choose a specific domain controller to which the AR Service writes the changes.

This diagram illustrates a distributed deployment of Active Roles with the following characteristics:

All Active Roles instances provide the same Active Directory access delegation workflow and can be treated as a single delegation mechanism. Sharing the same configuration settings between instances is achieved by means of SQL replication.

Each region has two Active Roles instances for failover and load balancing purposes. For failover purposes each instance is independent from a hardware and software standpoint by having its own dedicated AR Service, Web Interface (IIS) and SQL Server. This deployment is flexible in regards to hardware extension: new hardware can be added into the project for load balancing or troubleshooting purposes without changing the deployment.

The AR Service normally selects the nearest Active Directory domain controller (DC) to communicate with. Therefore, the AR instance located in a given site normally communicates with a DC found in than site. This has the following implications:

By default, the AR Service chooses the same domain controller to hold the role of both the Operational DC and DirSync DC.

The AR Service is permanently listening to the DirSync DC for changes related to Active Roles dynamic configuration objects, such as Dynamic Groups and Managed Units. Every operation that involves the retrieval or modification of Active Directory data, requested by Active Roles client interfaces or by AR Service internal logic, is performed against this DC. The user can specify another DC for the client operations, by using the Change Operational DC command in the Active Roles console or Web Interface.

Total of six SQL Server instances are deployed across the world-wide enterprise to host the Active Roles database, with two instances located in each of three major regions—North America, EMEA, and APAC. Each AR instance has a separate SQL database. The databases are synchronized by means of SQL Server replication function. One of the database servers holds the Publisher role while the others are Subscribers to that Published. 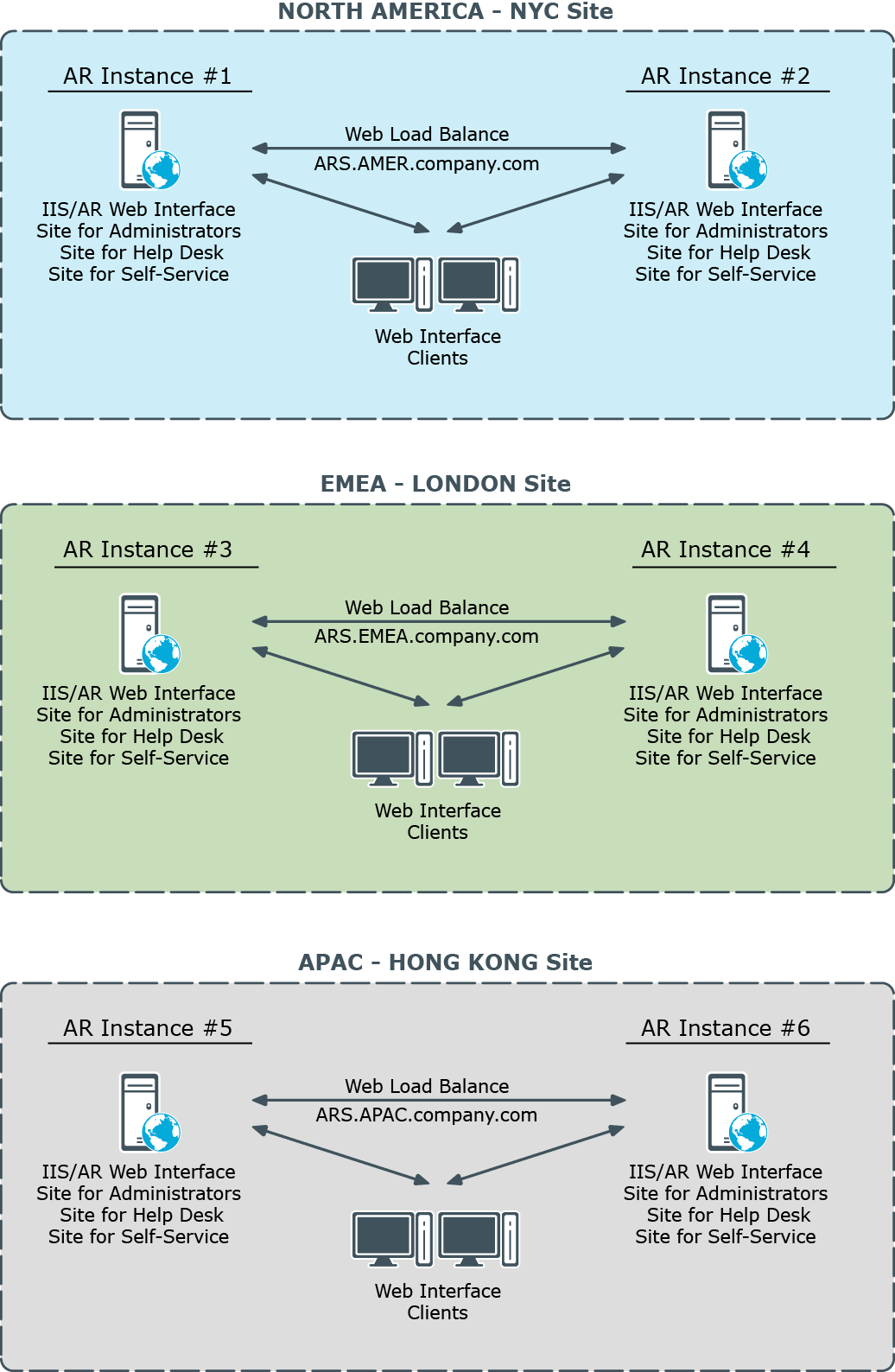 The Web Interface provides rich customization capabilities out of the box, so Web Interface sites can be easily configured to show or hide certain fields or attributes to the end-user, including custom (extended) schema attributes. It is also possible to add or remove commands, create new forms or customize existing pages by adding forms (tabs) and form fields (entries).