You can configure your SPS cluster in the following ways:

The following figure shows a cluster configured for central search with configuration synchronization. 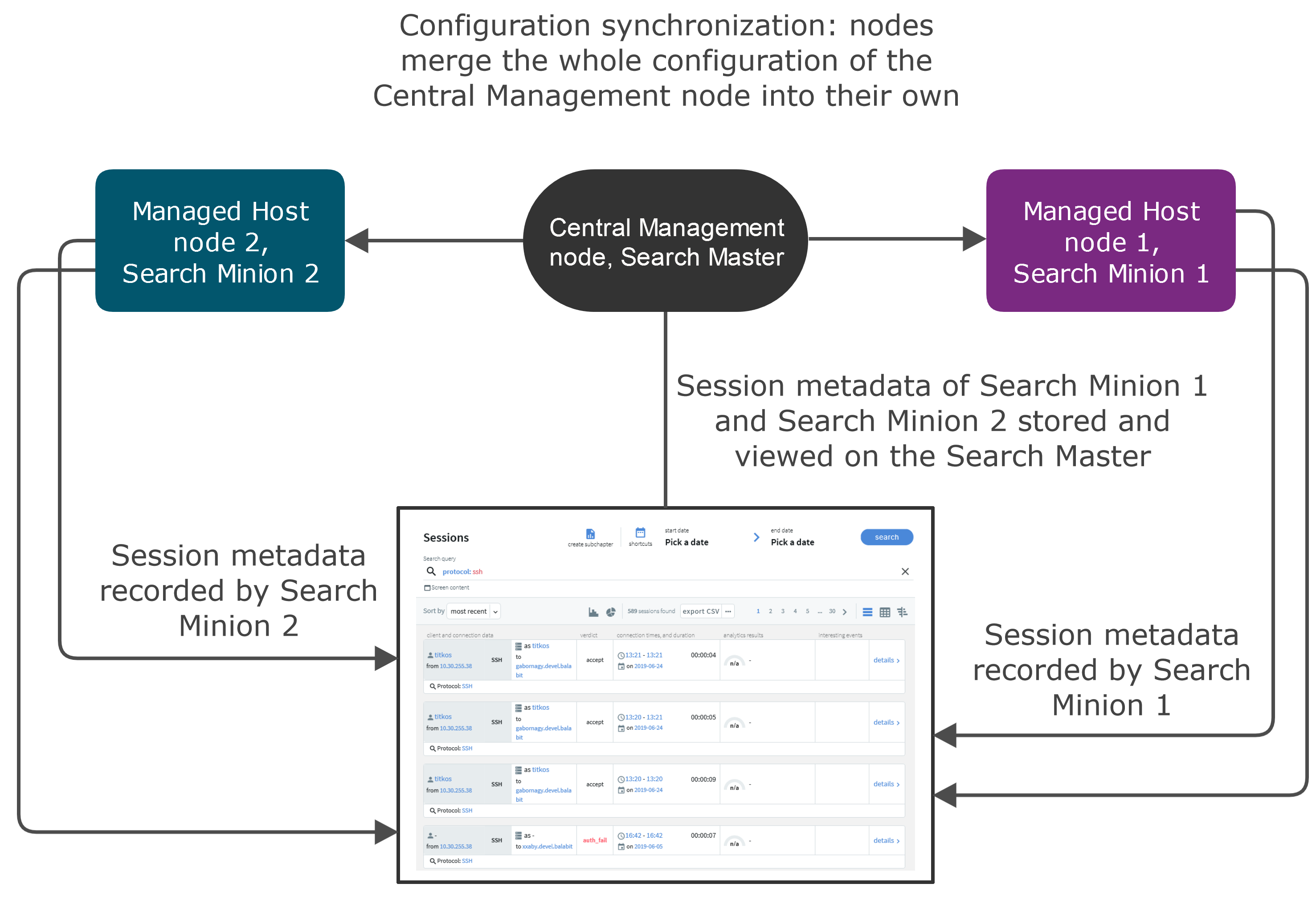 The figure above is an example of an SPS cluster configured as follows:

The Central Management node with a Search Master role and the connected Managed Host nodes with Search Minion roles require different configuration settings as described in the table below:

For more information on each role, see Cluster roles.

High availability (HA) clusters can stretch across long distances, such as nodes across buildings, cities or even continents. The goal of HA clusters is to support enterprise business continuity by providing location-independent failover and recovery.

To set up a high availability cluster, connect two One Identity Safeguard for Privileged Sessions (SPS) units with identical configurations in high availability mode. This creates a primary-secondary (that is, active-backup) node pair. Should the primary node stop functioning, the secondary node takes over the IP addresses of the primary node's interfaces. Gratuitous ARP requests are sent to inform hosts on the local network that the MAC addresses behind these IP addresses have changed.

The primary node shares all data with the secondary node using the HA network interface (labeled as 4 or HA on the SPS appliance). The disks of the primary and the secondary node must be synchronized for the HA support to operate correctly. Interrupting the connection between running nodes (unplugging the Ethernet cables, rebooting a switch or a router between the nodes, or disabling the HA interface) disables data synchronization and forces the secondary node to become active. This might result in data loss. You can find instructions to resolve such problems and recover a SPS cluster in Troubleshooting a One Identity Safeguard for Privileged Sessions (SPS) cluster.

The Basic Settings > High Availability page provides information about the status of the HA cluster and its nodes. 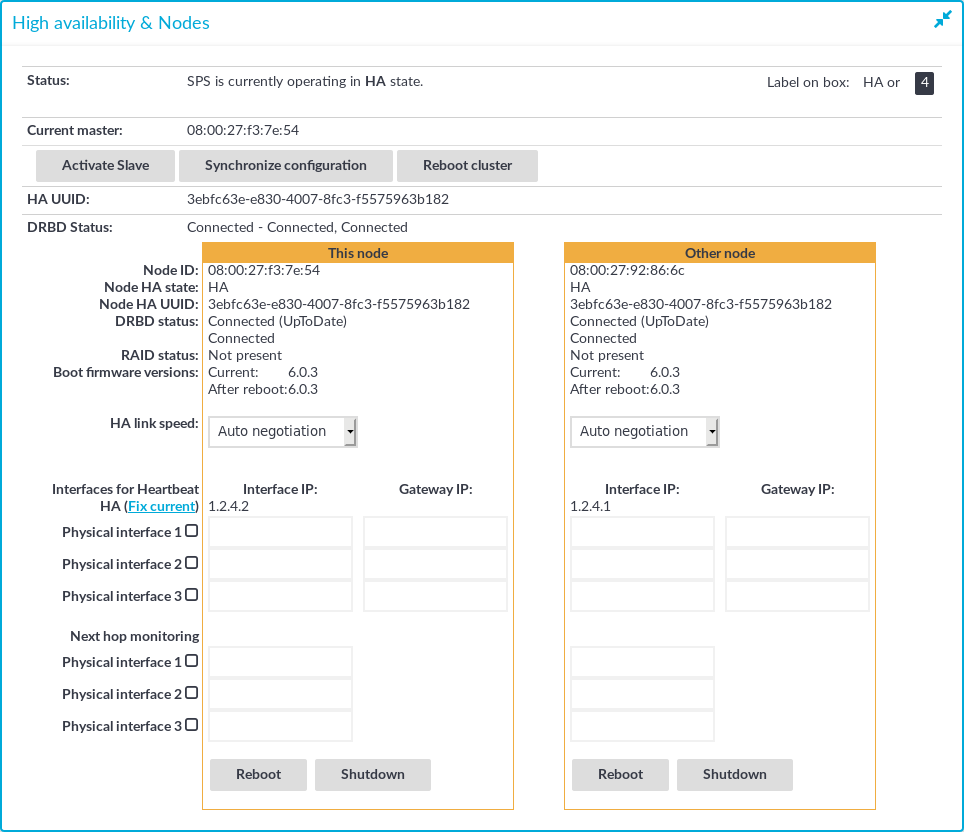 The following information is available about the cluster:

The active (that is, primary) SPS node is labeled as This node. This unit inspects the SSH traffic and provides the web interface. The SPS unit labeled as Other node is the secondary node that is activated if the primary node becomes unavailable.

The following information is available about each node:

This section is about the available configuration and management options for HA clusters.

Setting up a high availability cluster

For detailed instructions about setting up a HA cluster, see "Installing two SPS units in HA mode" in the Installation Guide.

You can configure virtual interfaces for each HA node to monitor the availability of the other node. For details, see Redundant heartbeat interfaces.

This option reboots the selected node.

When rebooting the nodes of a cluster, reboot the other node (that is, the secondary node) first to avoid unnecessary takeovers.

This option forces the selected node to shut down.

When shutting down the nodes of a cluster, shut down the other node (that is, the secondary node) first. When powering on the nodes, start the primary node first to avoid unnecessary takeovers.

To activate the other node (that is, the secondary node) and disable the currently active node, click Activate slave.

Activating the secondary node terminates all connections of One Identity Safeguard for Privileged Sessions (SPS) and might result in data loss. The secondary node becomes active after about 60 seconds, during which the protected servers cannot be accessed.

The Basic Settings > High Availability > DRBD status field indicates whether the latest data (including SPS configuration, log files, and so on) is available on both SPS nodes. For a description of each possible status, see Understanding One Identity Safeguard for Privileged Sessions (SPS) cluster statuses.