This tab allows you to view the current and assign a new RADIUS payload to the Defender Security Server object.

On this tab, you can use the following elements: 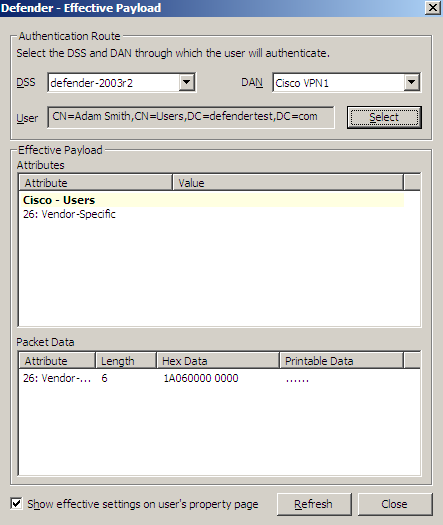 Click the Select button to select the user for whom you want to view the RADIUS payload that will apply.

The Effective Payload area displays the details of the RADIUS payload that will be effective when the selected user authenticates via Defender.

Remote Access Dial in User Service (RADIUS) is an access-control protocol that verifies and authenticates users based on challenge-response method. This protocol allows a computer to verify your identity, find out what you are allowed to access, and then tell you all of this.

The purpose of RADIUS payload is to have the Defender Security Server send information back to the NAS device for reasons such as extra security or for accounting or other reasons specific to the NAS.

To create a RADIUS payload object

For users to authenticate and access resources protected with Defender, you need to configure and assign security tokens supported by Defender to them. Defender can work with a number of security tokens, which include native Defender tokens and third-party tokens.

The native Defender tokens include the following: