How Management Console for Unix works

Management Console for Unix is a JEE (Java Enterprise Edition) web application that simplifies local user and group management on Unix, Linux, and Mac systems using a "mangement console". You access the mangement console through a supported web browser.

Management Console for Unix is deployed on a web server, or more specifically a Java Servlet container running on a Java Virtual Machine (JVM). 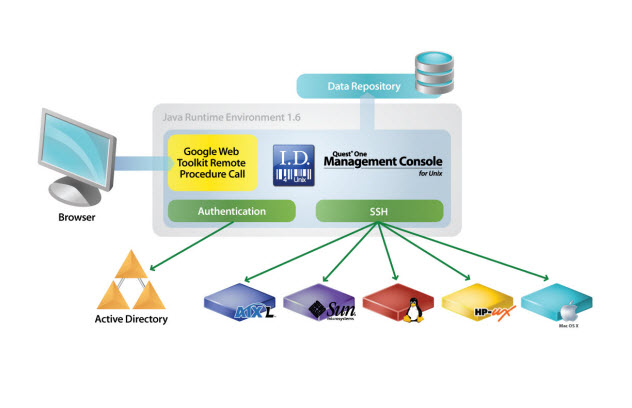 By default, requests are secured by enforcing connections over HTTPS. Communication between the web browser and web server are accomplished through HTTP requests over SSL. Requests from a supported web browser are sent to the web server, which processes the request and returns a response.

The data is stored in a local database on the Management Console for Unix web server. Access to the database is accomplished through JDBC (Java Database Connectivity) technology and is secured by credential authentication (that is, only administrators have access to the Management Console for Unix data directory). Active Directory connections are made through LDAP. These LDAP connections are authenticated with a valid Active Directory user account.

To remotely manage local users and groups on Unix, Linux, and Mac systems with the mangement console, you must install a Java-based web application that runs on a server which allows you to run a "mangement console" inside a web browser.

Prior to installing Management Console for Unix, ensure your system meets the minimum hardware and software requirements for your platform.

NOTE: When setting up a virtual environment, carefully consider the configuration aspects such as CPU, memory availability, I/O subsystem, and network infrastructure to ensure the virtual layer has the necessary resources available. Please consult One Identity's Product Support Policies for more information on environment virtualization.

Management Console for Unix must be able to communicate with Active Directory including domain controllers, global catalogs and DNS servers using Kerberos, LDAP and DNS protocols. The following table summarizes the network ports that must be open and their function.